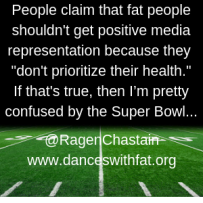 One of the reasons most commonly given for refusing to treat fat people with basic human respect, or to represent fat people in the media as happy, or successful at anything other than weight loss, is that fat people aren’t “prioritizing our health” and thus deserve to be treated poorly and denied positive media representation.

For today I’m setting aside the fact that this is both completely untrue and that it even if it was true it would still be extremely messed up, to discuss the almost unbelievable hypocrisy that is committed anytime this argument is made and, specifically, on Super Bowl Sunday, in this annual DWF post.

Today Super Bowl LIII will be played (for those not into sportsball, it’s the annual championship game of United States Football.) It has an anticipated audience of over 100 million people. Advertisers paid $5.25 Millon for a 3o second spot.

The dudes who will play in the game – many of them meeting the (totally bullshit) definition of “obese” – will be putting their short and long term health in jeopardy in the hopes of scoring more points than some other dudes, and winning jewelry.

If we really believe that people who don’t prioritize their health should be treated poorly and denied positive media representation, then I’m pretty confused here:

And what about the massive impact of concussions on players future lives (and the NFL cover-up thereof.)

Or the fact that the rate of bankruptcy means that taxpayers will likely pick up the cost of most of the future healthcare they’ll need.

Football players are given massive media exposure despite the fact that they are clearly not prioritizing their own health.

So if we think that people who don’t “prioritize their health” are poor role models and shouldn’t be represented positively in the media, what is this whole Superbowl thing about?  Where is the insistence that football players aren’t good role models because they aren’t prioritizing their health? Where are the calculations about how expensive football players (from Pop Warner to Pro) will be – not just with sports injuries while they play, but with the fallout from concussions, and the constant pounding their joints take? Where is the WON’T SOMEBODY THINK OF THEIR KNEES hand-wringing?

Where are the calculations of how much money could be saved if instead of playing football those who participate just walked 30 minutes a day 5 days a week?  Where’s the government-sponsored “War on Football Playing”? And all of that despite the fact that body size is complicated and not entirely within our control and we don’t have a single study where more than a tiny fraction of people were able to change their body size, but playing (or not quitting) football is absolutely a choice.

To be clear, people are allowed to play football. My point here is that this whole “It’s because of fat people’s health that we treat them badly” thing is just a crappy justification for size-based discrimination, and it’s long past time to stop using healthism and ableism to justify sizeism, and to end all of them instead.

Did you like this post? If you appreciate the work that I do, you can support my ability to do more of it with a one-time tip or by becoming a member. (Members get special deals on fat-positive stuff from myself and other cool businesses, a monthly e-mail keeping them up to date on the work their membership supports, and the ability to ask me questions that I answer in a members-only monthly Q&A Video!)

Wellness for All Bodies Program: A simple, step-by-step, super efficient guide to setting and reaching your health goals from a weight-neutral perspective.  This program can be used by individuals, or by groups, including as a workplace wellness program!
Price: $25.00 ($10 for DancesWithFat members – register on the member page)

Non-Members click here for all the details and to register!

Book and Dance Class Sale!  I’m on a journey to complete an IRONMAN triathlon, and I’m having a sale on all my books, DVDs, and digital downloads to help pay for it. You get books and dance classes, I get spandex clothes and bike parts. Everybody wins! If you want, you can check it out here!  (Members get an even better deal, make sure to make your purchases from the Members Page!)