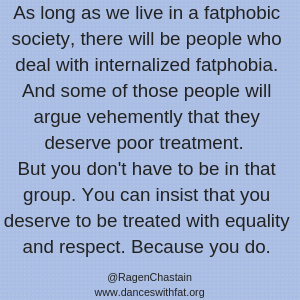 Internalized fatphobia is a form of internalized oppression, which is basically when oppressed people buy into the message of their oppressors. In terms of fatphobia, it happens when fat people don’t believe that they deserve the same things or same treatment that thin people get.

Internalized fatphobia can sound something like “If I take up more than one seat on a plane then of course I should pay for two seats!” Often this is a (conscious or subconscious) way to gain a modicum of approval from oppressors – the hope being that they think “well, she may be fat, but at least she has the decency to be self-loathing,” and that this attitude will lead them to better treatment than these fatties who are willing to fight for their right not to be second class citizens.

We live in a culture that rolls out fatshaming messages to us from infancy, so the fact that fat people suffer from internalized fatphobia isn’t exactly a galloping shock. It’s not our fault, it’s about discovering the ways in which we have internalized the stigmatizing and oppressive messages we’ve heard, and then rethinking them, and then deciding what to do about what we actually deserve. (For example, realizing that what is considered “a seat” by the airline is arbitrary, that we deserve to be transported from point a to point b for the same prices as the thin person beside us, and then maybe getting involved in some activism around that.)

I want to be clear that there are people who would argue that it isn’t internalized fatphobia, that they simply believe that, as fat people, they should be treated as second class citizens. Often their justification are that being fat is their fault, and/or that they could be thin if they wanted to, and/or that fat people existing is an inconvenience to thin people (and, for some reason, they believe that thin people’s feelings and desires should be centered and accommodated but it definitely isn’t because they’ve bought into a fatphobic society, because that would mean that they are dealing with internalized fatphobia…)

Regardless, I have no need to argue with fat people who think like this, they are allowed to believe whatever they want. What’s important to remember is that, first of all, their belief that they deserve to be oppressed is NOT a justification for oppressing other fat people. I’m happy for these people to have the option to pay twice as much for the same plane ride, but by no means does that mean that any other fat person should be required to. Moreover, if they are trying to visit their ideas on other fat people (ie: insisting that we don’t deserve space on a plane, or healthcare facilities that accommodate us, etc.) then we’re no longer talking about internalized fatphobia. At that point its just the same old, regular, garden variety, fatphobia that is harming others and should be fought.

As long as we live in a fatphobic society, there will be people who deal with internalized fatphobia, and some of those people will argue vehemently for their continued poor treatment. But you don’t have to be in that group, you can insist that you deserve to be treated with equality and respect. Because you do.

Did you appreciate this post? If you like the work I do, you can support my ability to do more of it with a one-time contribution or by becoming a member.

Portland Area Readers: I’m coming to Portland, OR! Join me for talks, dance, and yoga!

Wellness for All Bodies Program: A simple, step-by-step, super efficient guide to setting and reaching your health goals from a weight-neutral perspective.  This program can be used by individuals, or by groups, including as a workplace wellness program!
Price: $25.00 ($10 for DancesWithFat members – register on the member page)

Non-Members click here for all the details and to register!

4 thoughts on “What Is Internalized Fatphobia?”