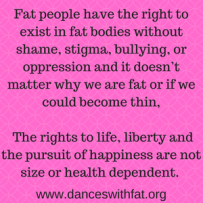 A popular online publication recently published a piece that purported to talk about the pros and cons of stomach amputation and stomach binding (also known as “bariatric” or “weight loss” surgery.)

There’s no way I’m giving it traffic, so there won’t be a link. And while people are allowed to do whatever they want with their bodies, including amputate or bind their stomachs (though that doesn’t mean it’s appropriate to discuss in every space,) it’s important that we talk about the realities of these surgeries. The story mentioned a failure rate of 1 in 10, which seems low based on the research, but perhaps that’s explained at least a little bit by what people consider a “success.”

One woman who says she’s “very happy” and has “no regrets” has had three of these surgeries. A lap band that had to be removed when “For five days, I wasn’t able to keep food down. At the hospital, I found out the lower portion of my stomach protruded through the band to the top, so I was basically choking on my stomach.” Next a gastric sleeve that caused “a lot of acid reflux” and “stopped losing weight around 220 pounds.” Then she went to Mexico and payed “$5,800 to $6,000” out of pocket (she notes that it’s half the price as the surgery in the US) because her insurance wouldn’t cover a third surgery. She currently weighs 180 pounds, has low iron and notes “I can’t eat really dry chicken. Certain textures are uncomfortable. Sometimes I get woozy from sugar.”

Another “success” story had to have her lap band removed and “The tubing on the band kinked, so the fluid in my stomach got in my lungs in the surgery.” Then she got gastric bypass, followed by eight plastic surgeries due to the discomfort her loose skin created.

Yet another chased her stomach amputation with two surgeries – hernia repair and emergency gallbladder removal.

Some people called their surgery successful because they don’t feel like they “take up too much space” anymore, their Tinder success increased, they are no longer interested in eating food, and that “unhealthy” food gives them “overwhelming nausea, ”that pizza would cause them to “throw up immediately and start getting cold sweats,” that they now have a single cookie for lunch. Others mention health improvements that many people have made without these surgeries.

Remember, those are the “successes.” The failures include a woman whose constant vomiting from her lap band triggered bulimia. Another had bulimia triggered by gastric bypass and still has to “puree a lot of my food to keep it down.” Others mention that they developed alcohol addiction.

The first thing I want to point out is who is missing in this article – the many people who gain all of their weight back, and the people who were killed by the surgery (even the Canadian Obesity Network admits that they kill more than 14 out of every 1,000 people – and that’s only the people who die quickly. When people die later due to complications, get blamed for their own deaths.

So let’s talk about all this “success.” Can you imagine the reaction people would have if after they got their tonsils out they had to eat pureed food and throw up all the time for the rest of their life? Or if they were likely to have to have 8 plastic surgeries (that their insurance may not pay for) after having their appendix removed? What about if their bunion surgery was considered a success even if it meant that they threw up immediately after eating pizza and got woozy after eating sugar for the rest of their lives, and  they got blamed if their bunion grew back worse than before in a few years? Or, imagine there was a surgery that actually did improve the health of fat people with absolutely no negative side effects, but didn’t lead to any weight loss – would they call that a success?

The fact that horrific lifelong side effects and possible death are considered to be perfectly reasonable outcomes of so-called weight loss surgery is an admission that healthcare professionals believe it’s completely ok to kill, or severely harm, fat people under the guise of “healthcare” as long as there is a chance we might end up thin.

And that’s not the only way that fatphobia plays into this. Notice how many of the things that are considered “pros” of the surgery would not be pros at all if we didn’t live in a fatphobic society. Is there any other surgery that doctors claim is about health, but sell using “more right swipes on Tinder” as a benefit? Have you ever heard a doctor try to talk a patient into surgery they don’t want by claiming that they’ll get more dates? It happened to one of my blog readers.  The problem is fatphobia and the solution is to end fatphobia, not to pressure fat people to risk their lives in an attempt to satisfy their bullies.

Far too often the medical centers and device manufacturers that profit handsomely from these procedures don’t give potential victims the complete picture – they trot out the few and far between “success” stories, downplay the risks, and somehow fail to mention the distinct possibility that you’ll die – or that the side effects will make you wish you were dead. They even lie about whether or not the surgery is reversible.

Christine had lap band surgery about 7 years ago. Her weight didn’t change but her health did, she says “I refer to my band as medically – induced bulimia.” She vomits every time she eats. She wants it removed, but the company that made it was sued and went out of business. Surgeons refuse to remove it because they claim that, since the vomiting is coming from the top of her pouch (and so doesn’t contain stomach acid,) it’s not a complication and thus doesn’t justify removal. She says “There was absolutely no problem whatsoever operating on a perfectly healthy fat person to make them smaller – but Oh hell no! we can’t fix the problem we created with our fat-biased, completely unnecessary procedure!!!”

Even worse – there are some doctors who are insisting the fat patients get this surgery before they will give them the same healthcare that a thin person would receive immediately. Thin people are not required to get a surgery that risks their lives and forces them to engage in behaviors that approximate an eating disorder just to get basic healthcare. Fat people shouldn’t either. (One of the most craven examples occurs when doctors refuse to give higher weight Trans people the gender confirmation surgeries they want, claiming it’s too dangerous at their weight, then suggest that those same people get…wait for it…stomach amputation surgery.  It’s disgusting.)

And as one of the comments in a Facebook thread about the original article said “Wow. I knew the risks with this surgery but it’s awfully sobering to read a giant thread of people who have died from it. So sad that as fat people it’s better for us to die skinny than live fat in this world”

You see, when you’re a fat person, you can’t trust doctors to see you as a human being worthy of care. We always have to remember that our doctor may be perfectly comfortable risking our life  in order to make us into a thin person who they would, only then, view as a person worthy of evidence-based non-lethal healthcare options. If we just want to get appropriate, evidence-based treatment (which is to say, the same treatment that a thin person would receive) in the body we have now, we have to do a ton of extra work, and even then it’s definitely not guaranteed.

People are allowed to do whatever they want with their bodies, including binding or amputating their stomachs. But nobody should be required to bind or amputate our stomachs just to be treated with basic human respect, or to get decent healthcare. And for those who have the surgery, whatever they are hoping to gain had better be worth dying for, because they very well might.

19 thoughts on ““Success” and Stomach Amputation”