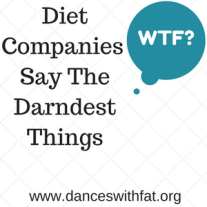 When I got an e-mail with the subject line “Media Alert: “Super Bowl” Calorie Costs—in Exercise” I rolled my eyes so hard that I saw my brain. It did not get better in the introductory paragraph (content warning for discussion of trading activity for food, and also terrible staff work.)

Dr. Charles Platkin, executive director of the NYC Food Policy Center at Hunter College and editor of [ridiculous website I’m not publicizing] demonstrates how much you would need to do to burn off typical “Big Game” snacks. For instance, you would have to run 49 football fields to burn off just two handfuls of potato chips or do “the wave” 6480 times to burn off 6 Buffalo Wild Wings Dipped In Ranch Dressing. Please see below news release.

Later on it uses the reflux-causing phrase “Is it splurge-worthy?” I don’t know why they would spam a fat activism blogger who has written several posts about the ridiculous things that diet companies say in media alerts just like this, but as long as they asked me to write about it, I decided I would.

I’m going to go into the snake oil salesman that I think Charles Platkin is in a moment, but let’s be clear that his credibility was shot the moment he started listing generalities about calories burned.  In truth age, gender, body size, and body composition are a few of the things that effect how many calories one burns during exercise. So if Kacy Catanzaro, Meb Keflezighi, and Shaq all ran 49 football fields, the calories they burned would be quite different. (Not to mention “two handfuls of potato chips?”  Whose hands – The Rock’s or mine?) Charles’ devil-may-care attitude toward accuracy is just the tip of the BS iceburg.

Just so we’re clear, Chuck is NOT a medical doctor.  He received a Ph.D. in Public Health from Florida International University.  He’s also an ACE certified personal trainer, so it’s hard to believe that he doesn’t understand the basics of how calories work. but I’m forced to assume that either he doesn’t know what he’s talking about, or he’s betting that we don’t. Regardless, it is unacceptable for him to spread misinformation for profit, though it seems like that may be his specialty.

His website is chock full of cheesy fad diet books (and, oddly, two screenplays) with absolutely no evidence to suggest that they have any better success than any other body size manipulation technique (which is to say, basically none.)

The tips from the media alert are equally ridiculous but this one is far and away my favorite:

FOUR SAMUEL ADAMS BOSTON LAGER BEERS = 68 MINUTES OF PLAYING PROFESSIONAL FOOTBALL
The only problem is that, according to The Wall Street Journal, there are only about 11 minutes of actual ball playing in a football game.  That means you need to play more than six games of professional football to burn off 4 Samuel Adams Boston Lager beers at 180 calories per 12 ounces.

Fit Tip: There are some great light beers out there. Do a taste test before the game and see if you can make the event more special with some fancy low calorie beers. Miller 64: 64 calories; Bud Select 55: 55 calories; Michelob Ultra: 95 calories; Natural Light: 95 calories; Miller Lite: 96 calories.

Even if playing professional football was an option for more than .08% of people who played in high school, there are still problems here. Is he talking about “playing professional football” as a running back? A kicker?  A long snapper? (As a band geek I feel compelled to mention that another tip includes “Performing in a marching band” with no suggestion as to whether he means playing in the pit, or marching with a piccolo – or a sousaphone.  Familiar and meaningful?)

Apparently he knows as much about how calories work as he does about beer since he considers Bud Select, Michelob Ultra, Natty Light, and Miller Lite to be “fancy low calorie beers?” Really? I’ll bet the folks at Stella Artois Light are pretty pissed.

I’m not going to go through all of the “tips”, but suffice it to say that nowhere does he take into account that people actually need food and that the food they eat on Superbowl Sunday might maybe, just maybe, be part of that need. Which leads us to the far more serious point:

On the surface it’s funny that a snake oil selling PhD (and would-be screenwriter?) had this media alert sent to a fat activist blogger. But below the surface it’s less about hilarity and more about gross incompetence.  This guy is the Executive Director of the NYC Food Policy Center at Hunter College and he is selling books that are no better than a bag of magic weight loss beans, and issuing media alerts that are based on inaccurate information, for which there is no evidence to suggest that they will create health or thinness (which are two separate things.)

Worse – this idea of “trading exercise for food”, or the belief that one must “earn” food, can trigger and perpetuate disordered eating and eating disorders. You can read a heartbreaking first person thread out it here, a piece by an expert from PsychCentral  and another first person piece here. (trigger warning for eating disorder talk.) His website claims : “This site complies with the HONcode standard for trustworthy health information.”

If you enjoy this blog, consider becoming a member or making a contribution.