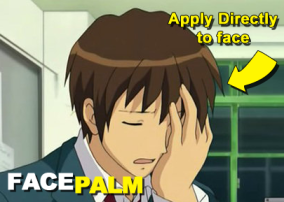 Several weeks ago Aerie, a subsidiary of American Eagle Outfitters, launched a series of videos that they described as a body positive approach to marketing men’s underwear. I was excited to see them making their work more inclusive, I even have a half-finished blog in my drafts about it.

Unfortunately that draft will never see the light of day because, before I was able to finish it, they put out a press release saying that the whole thing was …get a load of this… an April Fool’s Day Prank.

The brand reveals today its #AerieMAN campaign, featuring a mix of quirky characters of different sizes and personalities sharing “real life” stories in their skivvies, was all in good fun to parody the #AerieReal campaign by Aerie, a leader in body-positive marketing.

Let me take a stab at translating this from Asshole to English:

The brand reveals today that we are not anywhere close to being leaders in body-positive anything, but we are willing to use the concept (and plus size male models) to forward our brand, though of course the idea that we would actually market using men of diverse sizes is so ridiculous that we think it’s hilarious that anybody believed this.  #AerieRealBigotry #AerieNoFatDudes

What Aerie is actually planning to do is stop retouching their (sterotypically sized) models. That’s not a bad thing, it’s some progress, but why announce that progress by pointing out the major progress that you could have made, but didn’t.

Almost unbelievably, it gets worse. It turns out that at least one of the models in the campaign wasn’t in on the joke. Blogger/model Kelvin Davis told Buzzfeed that he was never told that it was a “parody.”

We were asked questions about male body image and those were our responses. Everything I said was heartfelt from a place we all can relate.

I have had people in the body positivity community upset with me about this whole thing. My part and contribution to the project was 100% authentic and real.

My stance and advocation for body positivity has never been a joke. What I represent is 100% authentic.

Happily, Kelvin has not been deterred from his work by American Eagle’s shitty behavior:

I can only hope that the positive response that they got to their campaign to use diverse bodies will help American Eagle realize that body diversity is a real opportunity and not a cheap joke. Until then, I’ll continue to treat American Eagle like it’s a parody of a clothing brand – something to laugh at, but never to buy from.

EDIT:  Thanks to reader Jenni for pointing out that another model who was part of the campaign has also spoken out against the way it was handled. You can read his excellent statement here!

14 thoughts on “American Eagle Thinks Body Positivity is a Joke”