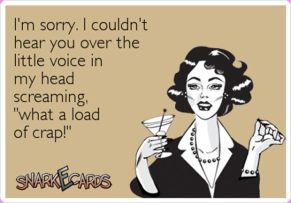 The Woody Show, the morning show on LA radio Alt 98.7, has a regular segment called “Fat Chick/Skinny Chick.” According to Allison Ficht, who blogged about this for the Ms. Magazine Blog:

The game starts with the DJs asking the participant a series of questions, and then filing the answers under a “fat” or “skinny” column. During one show, for example, they rationalized that if you’re married, you’re more likely to be skinny, while if you feel confident with your oral sex skills, you’re probably fat, since skinny girls “won’t do that stuff.” Listeners then text in their votes (fat or skinny) and the DJs open a picture of the participant and reveal whether they guessed “correctly

Charming. Who doesn’t want to wake up, turn on a show that says they  “talk about the things that are important to all of us” and hear tired stereotyping and fat-shaming being pedaled as entertainment. Oh, right, me. I don’t want to wake up to that.  And neither does Allison who contacted the show:

I emailed the producer and strongly suggested the station take it off the air. As a graduate student in the public health field who actively works to reduce stigmas, this show only perpetuates them. What does the impressionable 15-year-old girl, who might not be the skinniest, think after she listens to this? Does she need to start giving oral sex in order to get a boy to like her? Should she stop eating if she ever wants to get married? My email included questions like these, and urged the producers to use their show to encourage healthy lifestyles rather than perpetuate negative stereotypes about women.

So of course they got back to her, thanked her for her concern and said that they would make a stab a programming that is just a little less stigma and prejudice-based.  Just kidding!

At work the next day, I received an onslaught of texts from friends telling me to turn on the radio: The show was responding to my email on-air. The responses included the following: “Go make me some bacon and eggs”; “Get the fuck out”; “You’re either on-board with this kind of humor and take things with a grain of salt … or you’re not allowed to listen anymore”; “I’m not going to apologize for having the lowest common denominator simple kind of fun”; “Get that stick out of there”, and my personal favorite, “How do people like Allison get through life if they can’t understand nuance, subtlety and tone?” “The Woody Show” DJs further responded by posting to their Twitter account a screenshot of a Facebook post—from my private account—in which I express my frustration with the segment. The post exposed my full name and photo, and prompted the show’s followers to berate me for calling out their distorted idea of “fun.”

Ah, the old “Can’t you take a (mean-spirited, adding to the culture of oppression that you deal with everyday) joke?  As many of us have explained many times (like to George Takei, repeatedly) we can take a joke. but we shouldn’t have to – it’s seriously messed up that people feel so comfortable telling groups of people that they need to “toughen up” and become better at being stigmatized and made fun of without complaint, so that other people can laugh at our expense without having to feel badly or have their bullying behavior pointed out.

There are actions you can take, but regardless remember that this is bullshit, you are not the problem, radio shows that engage in stereotyping/bullying are the problem. Here are some activism options, and thanks to reader Brook let me know about this nonsense.

Check out Allison’s excellent blog about this