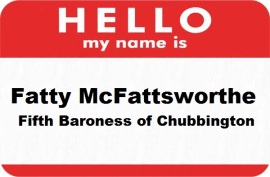 I got a question today from reader Diane asking how I feel about an internet meme that says: “You are not fat.  You have fat.  You also have fingernails.  But you are not fingernails.”  I’ve seen this in plenty of versions and I think it’s problematic on a lot of levels. I blogged about it before,  but it’s so ubiquitous I thought I would repost this:

First of all, as regular readers have probably already sussed out, I would be much more comfortable if this was written from the perspective of how someone feels about/for themselves instead of dictating to others how we should feel (ie: “I’m not fat, I have fat” instead of “You are not fat, you have fat”.)  People are allowed to look at their bodies this way because, hey, underpants rule.  That said, I think it’s an idea worth some exploring.

Let’s consider some other examples: You are not brunette, you have brown hair.  You are not tall, you have above-average height. When I’m flying in for a speaking gig I often tell the person who is responsible for picking up that I’ll be the short, fat, brunette -in the blue dress or whatever.  People often respond by telling me not to call myself fat, nobody in my life has ever told me not to call myself brunette.  Therein lies my problem with this – it seems to me that the reason to draw a distinction between being fat and having fat is that we are considering fat to be a negative thing from which we want to disassociate, and or we want to see it as so temporary that we don’t want to be identified as fat.

I don’t think the research suggests that many fat people will remove our fat.  Regardless, knowing that it’s possible that time and circumstance might change the size of my body, I don’t think that’s a reason to not identify the way that it looks now. I call myself a brunette even though it’s basically a certainty that I will someday have hair that is gray and not brown. So even though there’s the possibility that my body may someday not be fat (through illness etc. – it’s certainly not a goal of mine) I’m still fat right now. So why do I want to find a semantic way out of it?

The problem is the way that people with fat bodies are stigmatized, stereotyped, bullied, marginalized, and oppressed. I’m just not sure this can be solved by “having” instead of “being” fat. To me the fact that identifying a body as fat is considered an insult is a symptom of a problem, not the actual problem – so this can’t be solved through wordplay.  If brunettes are being oppressed I don’t think there is much to be gained by saying that I’m not a brunette, I just have brown hair.

Similarly, since fat people are being oppressed, I don’t think there is much to be gained by saying that I’m not fat, I just have fat.  Mostly because no matter how I describe myself, people can still see me and these oppressions are based on how I look to others, not on how I describe myself.  I also understand that the word “fat” has been used as derisive and I understand that not everyone is into using it as a reclaiming term and everybody gets to decide that for themselves.  For me, using the word fat to describe myself without apology tells my bullies that they can’t have my lunch money any more, and avoids pathologizing my body in the way that terms like “overweight” and “obese” do.

It’s possible that people would give me slightly better treatment (however begrudgingly) if I said that I’m not fat – I have fat, or if I characterized myself as being overweight in a way that indicates that I believe there’s a problem with my body.  I’m ok with passing on that “approval”, because  I am far more interested in fighting stereotyping, stigma, bullying and oppression, than I am in trying to avoid it through wordplay or concessions that I can make to my oppressors.  Other people may see this differently and/or make other choices than I do and, of course, that’s completely fine. But as for me, I am fat because I have fat and I’m fine with that.

Like my work?  Want to help me keep doing it? Become a member! For just ten bucks a month you can keep this blog ad-free, support the activism work I do, and get deals from cool businesses Click here for details

My Book:  Fat:  The Owner’s Manual  The E-Book is Name Your Own Price! Click here for details

Fit Fatties Virtual Events:  If you’re looking for a fun movement challenge that was created to work just for you, you can check it out here.  There’s still time to get in on Early Bird Rates.

If you have an issue with my selling things on this site, you are invited to check out this post.

26 thoughts on “Fat and Fingernails”