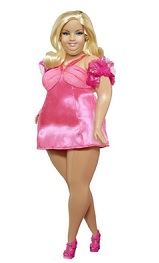 There has been all kinds of media hoopla about a Facebook community focused on plus-size modeling that put up this picture and asked if we should have a “plus-sized” Barbie. A number of blog readers have asked what I thought so here it is.

Let’s start with the most obvious.  The argument that I saw most against the doll was some form of the patently ridiculous notion that such a doll would promote obesity.  Put another way, this argument suggests that if fat kids ever see themselves represented as anything other than negative stereotypes, if they aren’t constantly given the message that there is one acceptable body and theirs isn’t it, if they aren’t ceaselessly bombarded with the message that they should hate and be ashamed of their bodies, then they’ll never hate themselves enough to make healthy choices and take care of their bodies. Seriously?

This idea, the myth of promoting obesity, has to die.  It’s dangerous and it is used to oppress people based on their physical appearance. It’s used as an excuse to keep fat people who don’t do what the oppressors want us to do (self-deprecate, self-hate, diet, and apologize for existing) hidden and beaten down by stigma.  And it self-perpetuates because people, including kids, don’t take care of things that they hate, and that includes their bodies.

If it wasn’t so sad I would be amused that so many of the people who are stricken at the idea that a fat Barbie may promote unhealthy behavior have absolutely no concern with a Barbie whose proportions are literally impossible for women to achieve.  If people are really worried about kids wanting to be like dolls, then they should be lobbying to take Barbie off the shelves.

Everybody deserves to see themselves represented in popular culture.  Fat people, people with disabilities, People of Color, everyone.  We should all be able to turn on the television, or go to the movies, or open a magazine and see someone who looks like us. Everyone deserves the chance to have and be a role model.  Every kid deserves the chance to have a doll that looks like them, so that they can put themselves into their play and dreams. Sure it’s profitable to the beauty and diet industries to start teaching kids, especially girls, as early as possible that their bodies are not, and never will be, good enough. But is that really ok with us?

Part of the reason that the impossible to achieve beauty ideal is so easily perpetuated is that so many adults buy into the system.  Spending time, money, and energy trying to get as close to Barbie as possible.  This system is set up so that we spend all of our energy trying to gain power within it and convincing our daughters to do the same (though it will only ever allow a tiny few to do so), that we don’t have time, money or energy to realize that we are powerful enough to dismantle the system.

The lack of representation doesn’t just hurt kids who never see a positive representation of themselves, it also reinforces the message to every other kid that bodies that don’t look like Barbie are wrong and bad.  Rhetoric like that I am seeing around this Barbie doll teaches kids that it’s ok to stereotype fat kids and that leads to bullying.

On the other side, many fat people objected to this Barbie’s look – that the way that she is fat isn’t the same way that they are fat.  There were a lot of what I found to be disturbing comments from people in the Plus Size Model focused Facebook community where this idea was first floated about how fat women are “supposed” to look  (less chins more “curves”  meaning – it seems – a hourglass shape with a “thin” face) and, perhaps most disturbingly about a “healthy sized” Barbie, based on the mistaken notion that body size and health are the same thing, a lot of it’s ok to be this fat but not that fat etc.

I’m personally sick of the only “good” fat body being represented as an hourglass figure with a thin face (even if it takes a highly skilled retouching artist to get it done) so I’m fine with this fat Barbie’s chins.  I think the big issue here is that currently we are discussing only two sizes of Barbie when the best possible thing, with Barbie, as with the media, television, movies etc. is to be as representative as possible instead of trying to justify a lack of representation.

Fit Fatties Virtual Events:  If you’re looking for a fun movement challenge that was created to work just for you, you can check it out here.  There’s still time to get in on Early Bird Rates.

The Book:  Fat:  The Owner’s Manual  The E-Book is Name Your Own Price! Click here for details

Become a member: For just ten bucks a month you can keep this blog ad-free, support the activism work I do, and get deals from cool businesses Click here for details

Interviews with Amazing Activists!!  Help Activists tell our movement’s history in their own words.  Support In Our Own Words:  A Fat Activist History Project!

If my selling things on the blog makes you uncomfortable, you might want to check out this post.  Thanks for reading! ~Ragen

37 thoughts on “Should We Have Fat Barbie Dolls?”