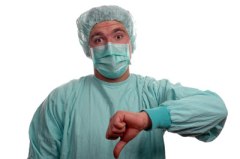 Tom Hanks recently announced to the world that he has been diagnosed with Type 2 Diabetes (T2D).  Let’s get the first thing straight – he, like Paula Deen before him, was under NO OBLIGATION to do so.  Celebrities do not owe us every detail of their lives.  Tom Hanks is an actor, his job is to portray a character, not to disclose all of his health issues to the general public.  Can you imagine if your plumber told you that she’d been diagnosed with T2D four years prior and you were completely angry and indignant that she didn’t tell you sooner?  So, though he was under no obligation to do so, Tom Hanks went public as is his choice.

In an interview with David Letterman he said “My doctor said, ‘If you can weigh what you weighed in high school, you’ll essentially be healthy and not have Type 2 diabetes.”  If this is true, if Mr. Hanks did not misunderstand or misspeak, then his doctor is dangerously misinformed.  His weight may have nothing to do with it. Some have suggested that it may be related to the major weight fluctuations he underwent for films like Philadelphia and Castaway.

Before we go too far into this, let’s talk about another issue:  The best thing, the only thing that I believe is ethical, that we can do once someone has been diagnosed with a health issue is provide shame-free, future-oriented care.  Though disease prevention is a reasonable thing to work on in general, it’s not reasonable to talk about it to someone who has a diagnosis already.  At that point what matters is providing options to the patient moving forward that are evidence based, creating a treatment plan (or not) based on informed consent, and never ever blaming or shaming the person for their illness. Nothing good comes from blaming or shaming people about their health issues.

Prescribing weight loss as a T2D intervention is highly problematic.  Choosing a random weight (just as a hypothetical example – what one weighed in high school) is ludicrous.  Tom Hanks did a good job of pointing that out when he said that his response to his doctor was  “Well, I’m gonna have Type 2 diabetes because there is no way I can weigh as much as I did in high school,” which was 96 pounds.

I’m not going to get into treating T2D in this post other than to say that there are many options, that people of all weights get T2D, that there are definitely interventions that don’t involve weight loss, and that the best things I think we could do from a public health perspective is to eliminate shame and blame around it, stop prescribing weight loss as an intervention, and focus on creating behavior-based treatments plans based on patient goals and desires (including medication and “alternative therapies.”

Tom Hanks gets to do whatever he thinks is best to deal with his diagnosis, but let’s remember that he is an actor and his doctor is clearly just practicing medicine.

The Book:  Fat: The Owner’s Manual  The E-Book is Name Your Own Price! Click here for details

Become a member: For just ten bucks a month you can keep this blog ad-free, support the activism work I do, and get deals from cool businesses Click here for details

Interviews with Amazing Activists!!  Help Activists tell our movement’s history in their own words.  Support In Our Own Words:  A Fat Activist History Project!

If my selling things on the blog makes you uncomfortable, you might want to check out this post.  Thanks for reading! ~Ragen

46 thoughts on “Tom Hanks’ Doctor Might Be Totally Incompetent”